3. The Falkenmark indicator clearly showing the degree of water scarcity

Water scarcity in developing countries and misunderstanding by advanced countries

Through the activities under the IHD, Prof. Falkenmark read many reports on developing countries. As a result, she became aware of the seriousness of poverty in developing countries, especially in Africa, and came to understand that poverty was closely related to the scarcity of water resources.
In the 1970s, although advanced countries provided support for developing nations, they never thought that poverty in developing countries was related to water. The only serious issue facing advanced countries at that time was water pollution caused by industrialization. Therefore, they did not think about water scarcity. They had not realized that seriousness of water issues also varies depending on the region.

At the beginning of the 1970s, a wide range of meetings were held at the United Nations because of increasing interest in international environmental issues. At one such meeting, some researchers reported that we had sufficient resources to support an extremely optimistic maximum of 40 billion people.

Prof. Falkenmark also attended the meeting and questioned the report. She felt that the researchers had not considered the amount of water required for that number of people. She wondered if we had sufficient water to share with 40 billion people.
This motivated her to inform people around the world about the importance of water for us. 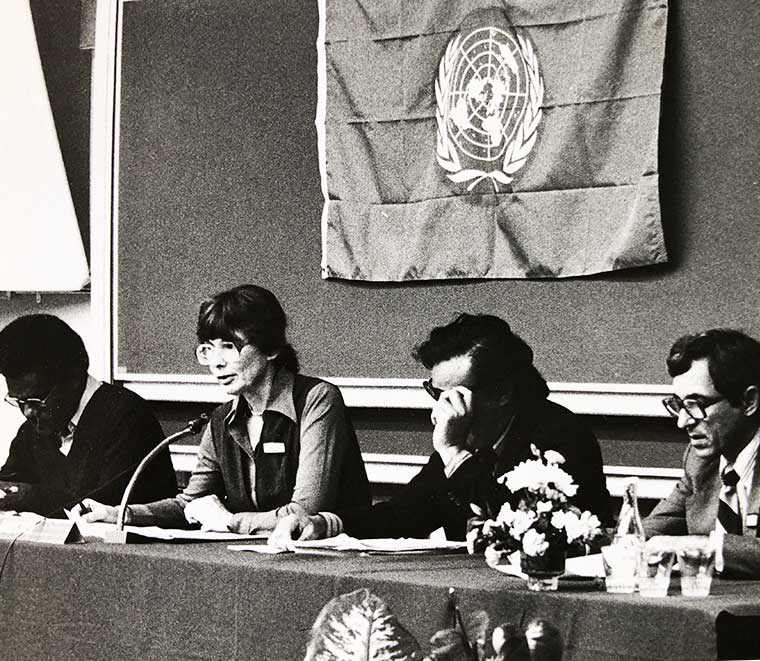 At a United Nations Conference (In 1980s: Second from the left is Prof. Falkenmark.)

Between the 1970s and 1980s, population rapidly increased and the amount of the water available per person as a function of the total amount of water resources on the Earth decreased. In Africa, serious droughts occurred, which brought serious water scarcity, increased starvation, and caused many deaths.
Prof. Falkenmark thought about the need to indicate the total amount of available water for people around the world, the amount of water required per person, and the maximum population that the global water supply can support. She decided to create an indicator to clearly show at a glance water scarcity around the world.

Let's say there is a certain amount of water in one place. The water should be shared equally by the people living there. As the number of people there increases, the amount of water available for each person becomes less. Water scarcity develops when a growing population decreases the share of water required to survive past a certain point.
Prof. Falkenmark consulted a wide range of reports from around the world to calculate the population load that leads to water scarcity. Her investigation revealed that more than 1,000 people in an area with a 1 million m3 water supply per year causes water scarcity.

Based on these results, Prof. Falkenmark clarified the following:

The number of people sharing 1,000,000 m3 available freshwater annually is

This concept became what is known as the Falkenmark indicator. It has been widely used as an indicator to show the degrees of global water scarcity.
Prof. Falkenmark said, "The point with the people per flow unit is the people is in focus." Population has been increasing. Therefore, it is important for us to consider the amount of water resources based on population to understand water scarcity.

A graphical explanation for the Falkenmark indicator